Or in other words, my January MAGAM Challenge projects are finished!  As you may recall from my last post, the entrance into the new sewing year was going to be three projects using the same knit fabric.  My plan was to make a dress and two tops. And here they are!  Of course the sun decided to hide behind a cloud when I was taking the dress photos so it looks a bit darker, but I promise, they are all made from the same fabric. 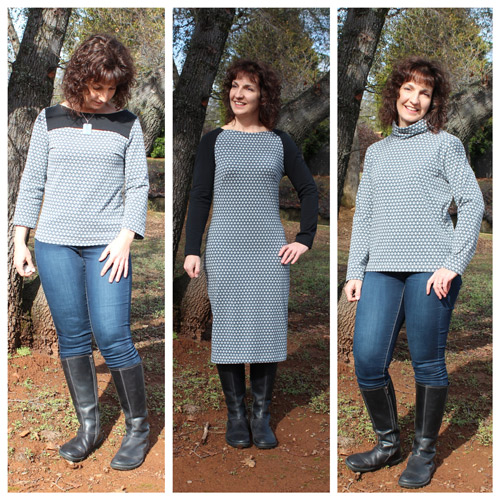 Everything worked out great - after a few alterations.....

I cut out a size 12 thru the bust and waist, tapering to a 14 at the hips.  The bust and shoulder area fit ok, but the sleeves, hips and that rounded neckline were giving me grief.

The sleeves looked like they were bat wings or something.  The black I used for the sleeves was VERY stretchy so I'm not sure if it stretched a little out of shape or if Vogue thought my shoulders were really supposed to be that broad.  They stuck out looking like wings right after the slope of my shoulder so I ended up restitching the arm about three times until it looked like something less prone to taking off.   And the sleeve length was just unbelieveable!  I cut off 4 inches in length - and that's before I hemmed the sleeves!  I think the pattern was truly designed for a bat with the very long wingspan!

As for the neckline - I thought the high rounded neckline would look pretty slick, but instead, it was making me gag when I put the dress on.  It was a bit too high for my throats liking so I ended up cutting off about 2.25 inches of it and making a more rounded neckline.  Here's the neckline pinned prior to modification: 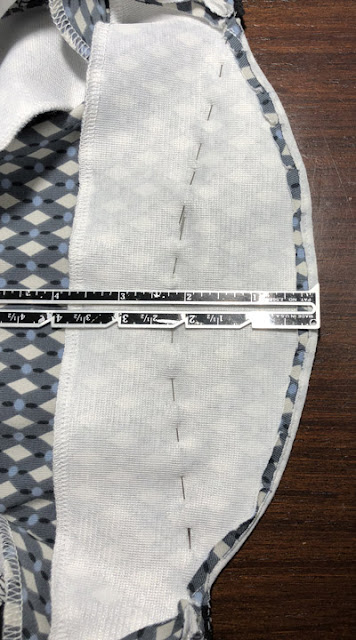 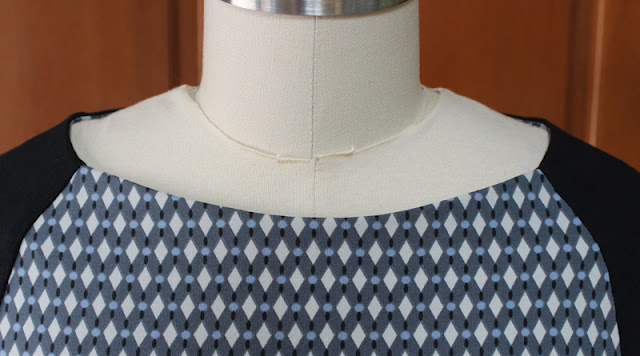 The hips - well - that was a simple alteration - just took them in about 1/2 and it was good to go.  Maybe I should have just cut out a 12 everywhere instead of taping to a 14 at the hips. 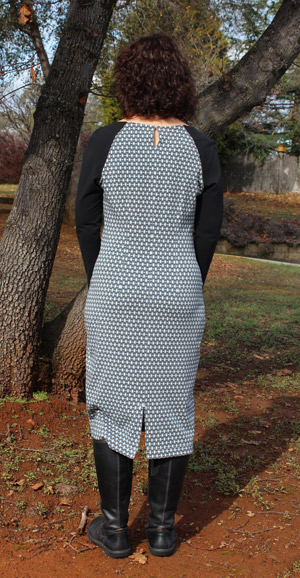 I had doubts about the front slit in the top before I cut it out.  Visions of me bending over and seeing my belly button thru the slit kept coming to mind.  But I thought what the heck - if it doesn't work out at least I'll have two other garments made from the same fabric. I proceeded to sew the garment in hopes that the slit wouldn't be too revealing.  Upon the first try-on sans sleeves, the gaping was starting to sneak in.  So I thought I would first baste on the sleeves and see if that made a difference.  With the sleeves barely hanging on, I tried it on again and found that the gaping was getting a little better and I thought to myself "if I just take in the front and the sleeves about 1/4 around the front armysce, this might solve the problem".  So that's what I did.  I started the extra 1/4 seam allowance at the middle of the overlapped front pieces and tapered to the normal 5/8" seam allowance for a total of about 4.5 inches as shown by the seam gauge below. 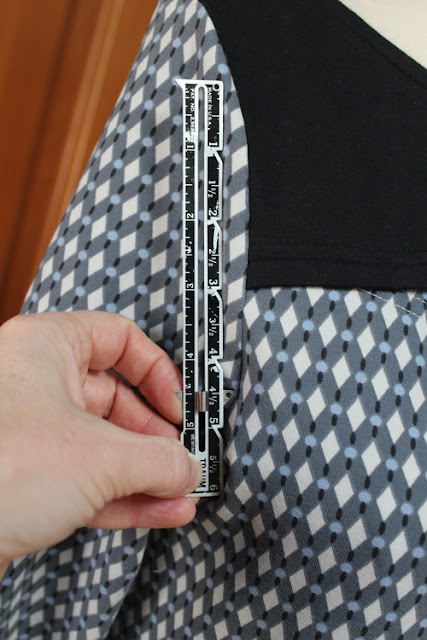 Now with my sleeves fitting a little more snug in the front, the gaping was now becoming more of a slit, rather than a vast chasm.  I then thought if I sewed the front sections together for a few inches between the armhole and the bustline, then the gap would have no option but to behave properly and that's exactly what happened!  Yeah!  No more viewing of the belly button! 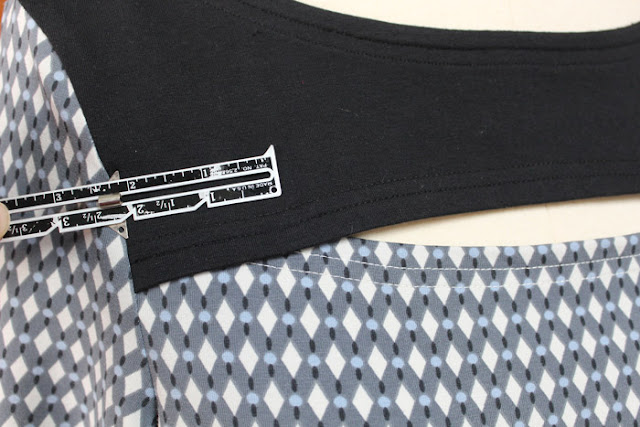 The neckline was another story.  I must have stretched it just a little too much when sewing the band on because now it was flipping up funny.  But never fear - that's where the trusty steam iron came in.  I put it on the dress form and steamed that neckline into submission and now it fits great.  Phew!  A garment on the brink of the trashbin had been saved! 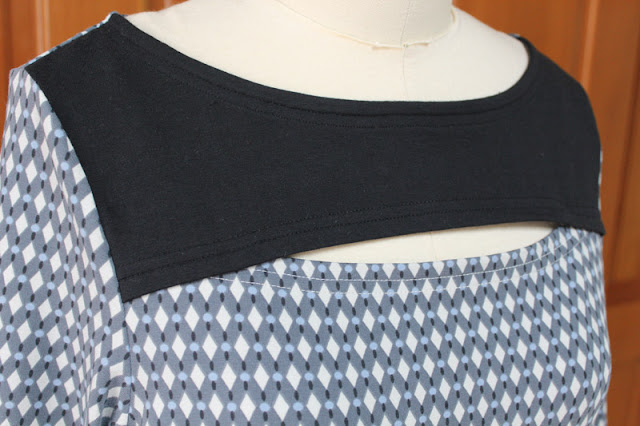 What can I say - I've made this turtleneck so many times that I knew if the other two garments totally bombed, at least I would get a turtleneck out of the deal!  And sure enough - the pattern didn't disappoint. 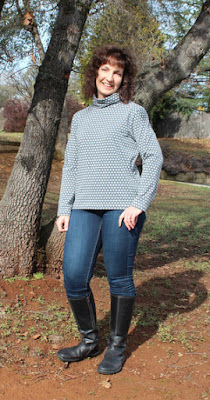 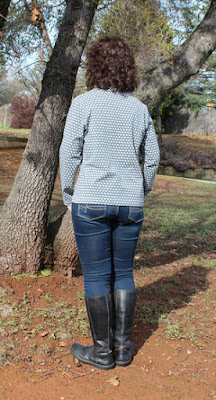 My Butterick 6377 top is ALMOST finished and I'll be posting it soon.  After that will be the same Vogue dress again as you saw earlier.  Yes - I'm going to give it another try in a different fabric.  This one is sure to make your eyes go crossed - just take a look at this: 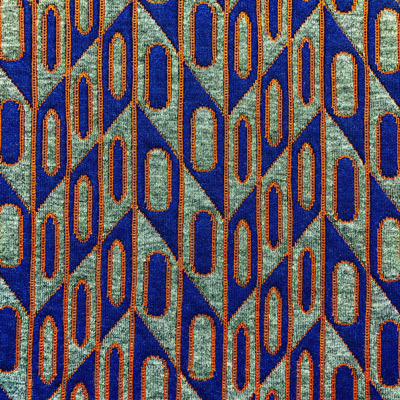 I bought that fabulous knit at the local quilting guild's annual sale last year.  I only have 1.5 yards of it, so the sleeves will be 3/4" in length.  I think I'll need some crazy jewelry to go with this too - maybe an orange bracelet?  And, I was thinking of adding an orange zipper to the back - just a short one - maybe from the waistline up?  Or who knows - maybe a full length one!  We'll see what I can find!

Posted by Stars Threads at 3:00 PM

Stars Threads
I've been sewing since the age of five and haven't stopped yet! Although I do a little crafty stuff, garment sewing is my true passion. I hope you will find some interesting ideas and concepts on my blog and stay for awhile.

Podcasts I listen to

My Reviews on Pattern Review.com