For "Artful August" my Indygo Junction's Trench Topper started out with an oriental flair but has turned into something quite different.  I think it looks more Russian/Mongolian rather than Oriental.  Could it be because I changed the collar to a stand-up collar and that the collar and cuffs are made from fake fur?  Who knows! 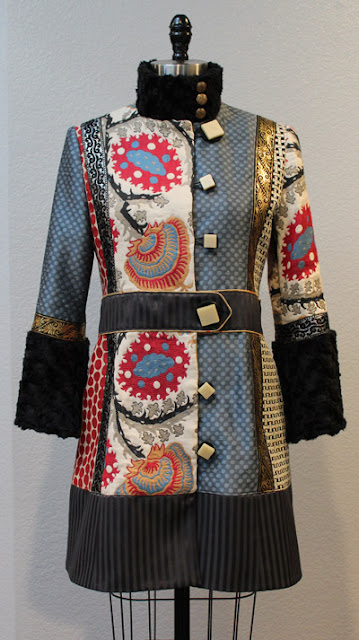 Should I be holding a sword in this picture? 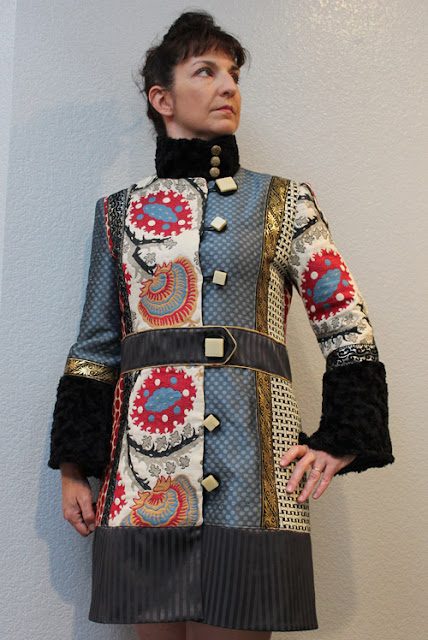 I love the mix of prints and patterns in the coat. 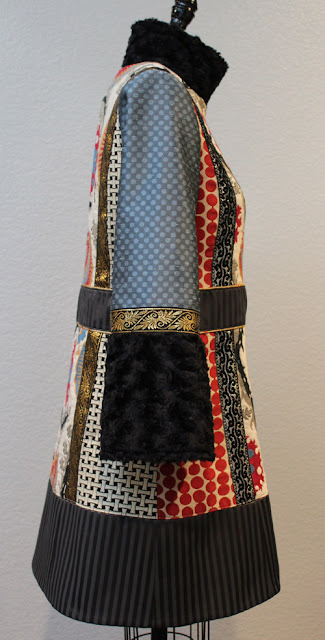 Oh and yes - when I actually do wear this coat, I'll be wearing pants or a skirt underneath it.  It was 103 degrees outside this day when I took the photos so I wasn't about to venture outside in a coat trimmed in fur to take some pics!  It was hot enough inside with shorts on and my hair pulled up! 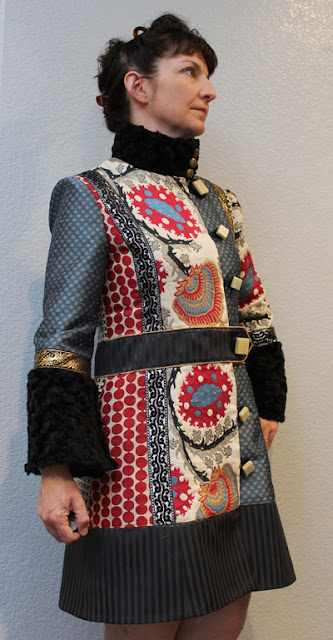 Back view is super cool! 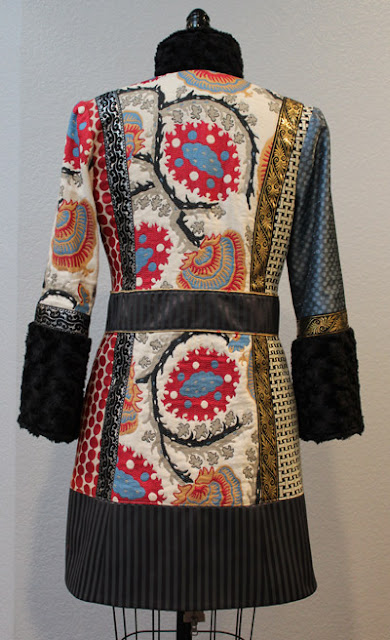 And I'm just throwing this one in for kicks.  Every seam in the coat is topstitched, although it's hard to see in this photo. 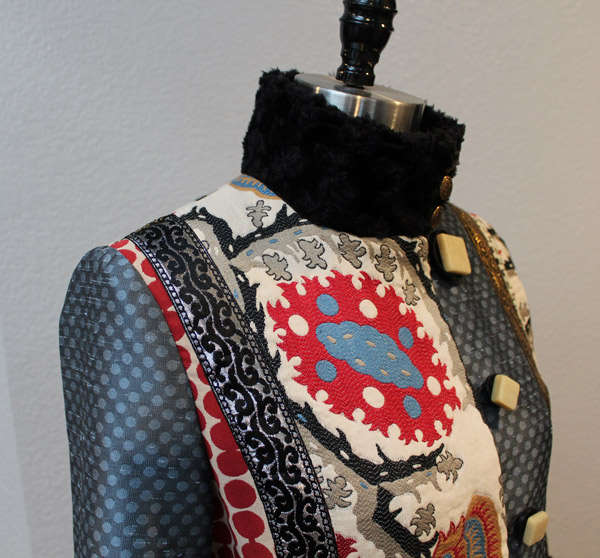 So lets review how this whole project started out.

Here's my starting bunch of fabrics.  The main fabric in the middle was my inspiration fabric and I recently purchased all of the fabrics to the left of it to coordinate.  The inspiration fabric was purchased at one of the guild's sewing garage sales a number of years ago.  There wasn't alot of the fabric and I thought it might turn into a purse or totebag one day, but I really like the coordinating fabrics that went with it so it was destined to be this coat!  The fabric stack to the right are ones I pulled from the stash that matched, but the only one I ended up using was the fake fur.  The polka dot on the bottom I used as the lining, and I only trims I used from the starting pile were the two ribbons in the top middle. 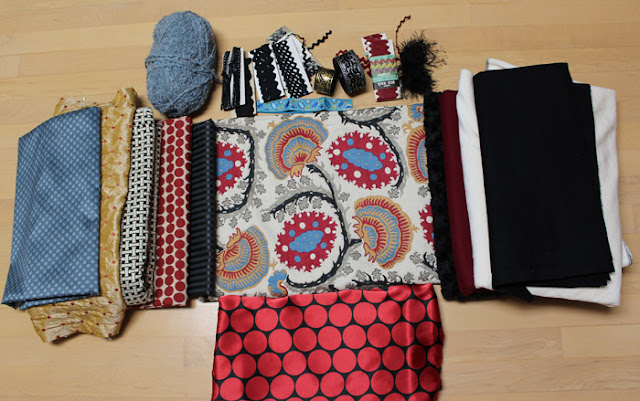 After drawing a few pictures and figuring out the fabric placement, I finally settled on #3.  I did end up changing that red sleeve to a blue sleeve and the tab I had planned for the collar just didn't work. 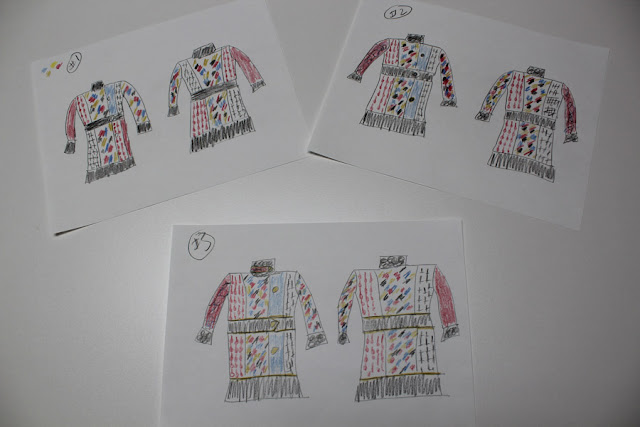 I pinned the pieces to my dress form as I cut them out.  This really helped  make sure I had the right pieces in the right places. 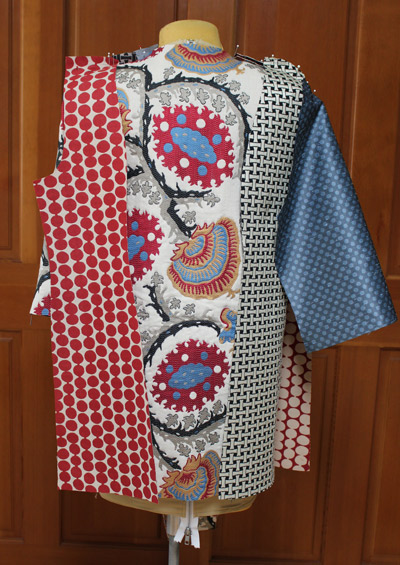 And here it is as it was coming along with the main body sewn together, the bottom panel pinned on, the belt pinned on and I was starting to play with the ribbons and trims. 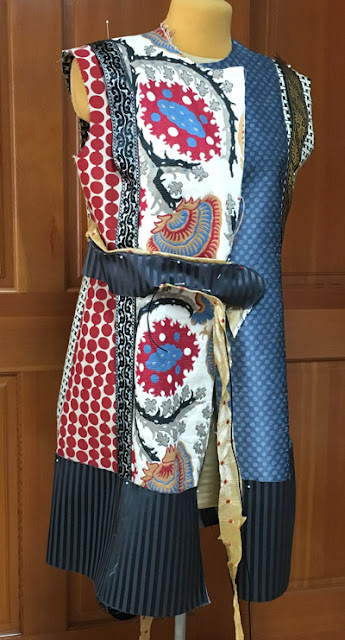 The buttons, closures and belt details:

For the buttons, I knew I wanted to use the square buttons in the coat as they were my Grandmother's buttons - they may even been bakelite but I'm not sure.  The square buttons looked a bit add next to all of the other circular shapes though so I found these black buttons at the store that would work well behind my square buttons.  The square buttons had a rather large shank on the back and the black ones are curved so the shank fits in it's little dip just perfectly. 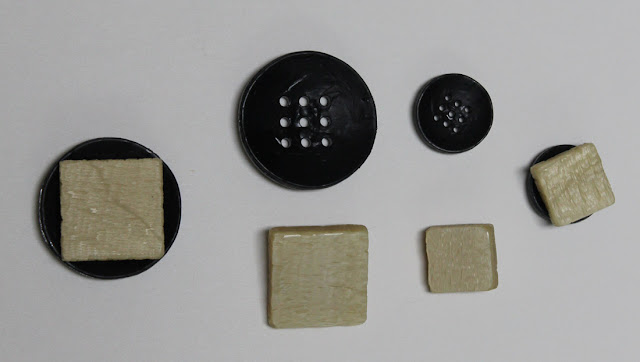 I used small round elastic to make loops for the buttons. 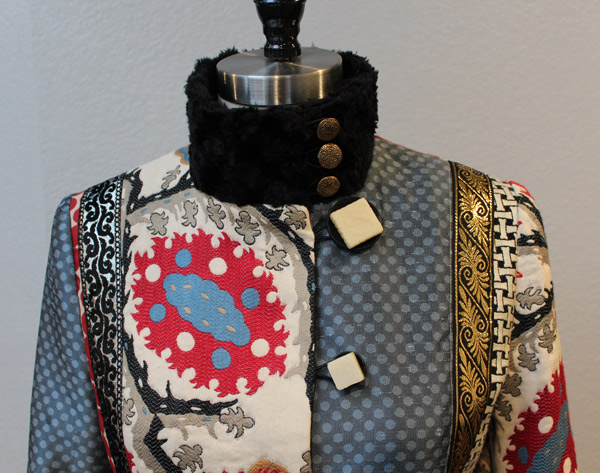 The button on the belt has a snap closure behind it.  I had one black covered snap set in the stash so this worked out perfectly. 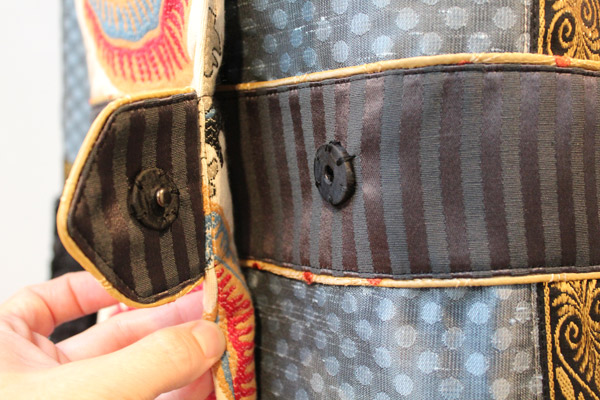 The mock belt is trimmed with yellow/red piping and stitched into place around the waistline. 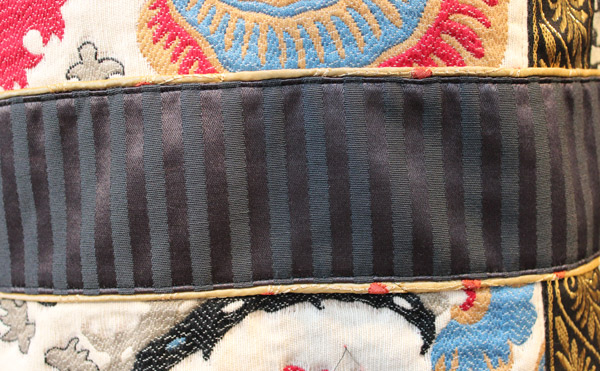 Isn't the lining fun!?!?!?  The pattern doesn't call for a lining, but I added one.  The facings are trimmed with the same yellow/red fabric I used for the piping around the belt. 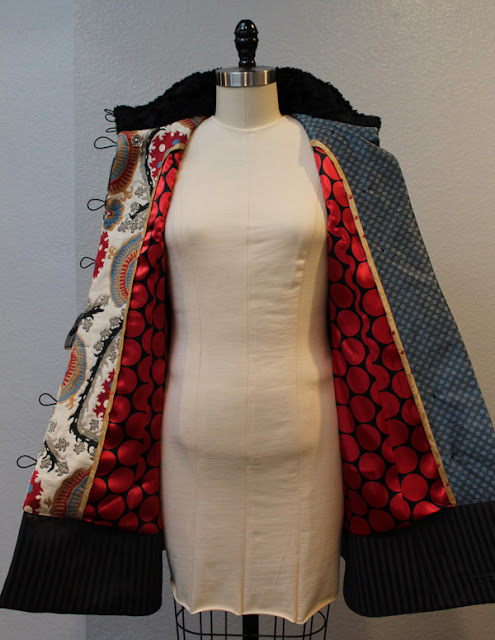 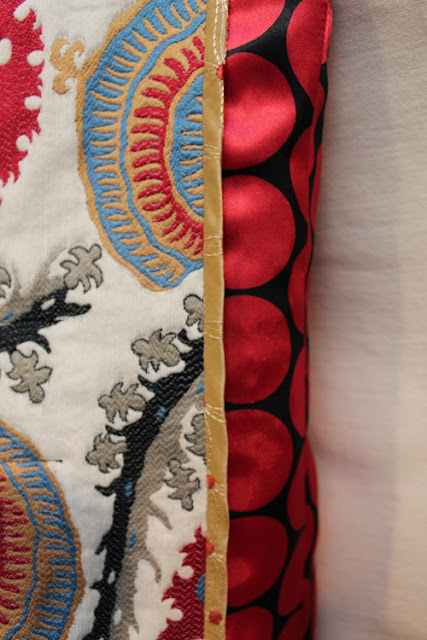 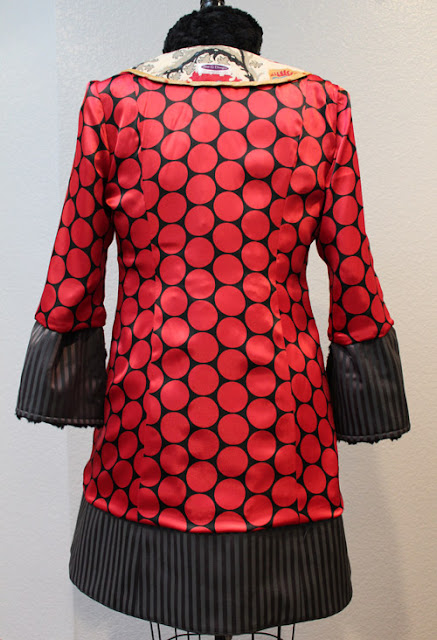 I happily added my label to this coat. 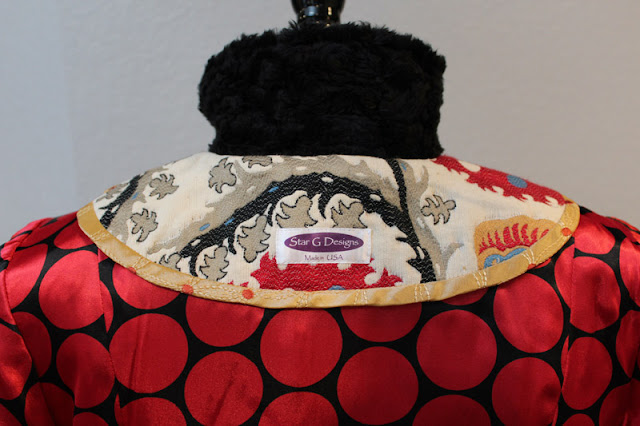 That fake fur (along with other threads) was everywhere when I finished the coat! 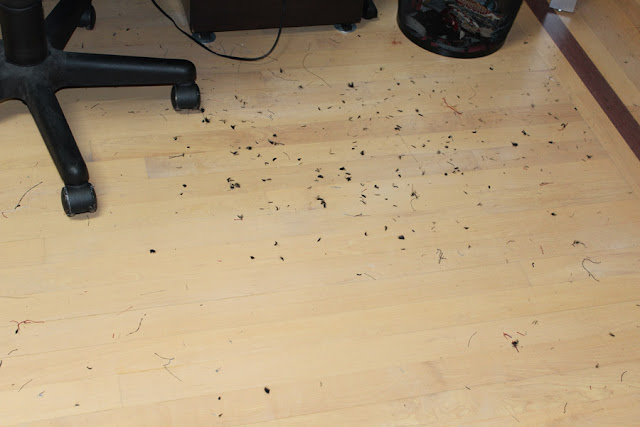 I am super happy with how this project turned out.  Now if the weather would ever cool off, I might be able to wear it!  And for everyone following along with my stashbustin quest - here are the latest numbers:

Posted by Stars Threads at 7:34 AM

Stars Threads
I've been sewing since the age of five and haven't stopped yet! Although I do a little crafty stuff, garment sewing is my true passion. I hope you will find some interesting ideas and concepts on my blog and stay for awhile.

Podcasts I listen to

My Reviews on Pattern Review.com